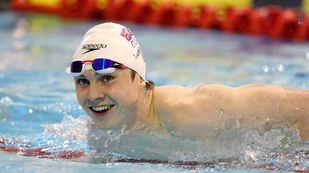 Commonwealth 200m Breaststroke champion Ross Murdoch is one of the brightest talents in world swimming, having won a pair of medals at both the Commonwealth Games and European Championships in 2014.
The Scot made his first breakthrough in 2012, reaching the 200m Breaststroke final at the British Gas Swimming Championships courtesy of a seven-second personal best at London Aquatics Centre. His performance in London earned him a spot on the team for the 2012 European Junior Championships in Antwerp where he continued his progress with silvers over 50m and 200m Breaststroke.
The following season, he topped the podium again, winning 100m Breaststroke gold and 50m Breast bronze, both in Scottish records, at the British Gas Swimming Championships in Sheffield.
A month later, Murdoch made his senior international debut at the World Championships in Barcelona, reaching the semi-finals of the 100m Breaststroke.
In 2014, Murdoch truly underlined his status as a world class performer, winning 200m Breaststroke gold and 100m Breaststroke bronze for Scotland on his Commonwealth debut at Glasgow 2014, then adding silver over both 100m and 200m Breast at his European debut in Berlin the following month.
In the Pool
Favourite Event
100m Breaststroke
Finest Ever Performance
Swimming a 59.80 in the 100m Breaststroke at the British Trials in 2013
Aspiration
To win medals at major competitions and enjoy the process
Role Models
I don't really have a role model as such, however seeing the emotion of all champions is enough to drive me towards being the best I can be
Out of the Pool
If I Wasn't A Swimmer, I Would Be
A jedi knight
Tip For The Top
Perserverance and consistency
Life After Swimming
Not sure yet
Would Most Like To Meet
Luke Skywalker
Most Prized Possession
My dreams and ambitions!
Biggest Influence On Career
My dad. He has always pushed me to be the best I can be!
Favourites
Sports
F1, Darts, Basketball, NFL
Band/Music
Foo Fighters
Food
Lasagne
Hobbies
Playing pool, Xbox and darts, spending time with my friends at and away from the pool