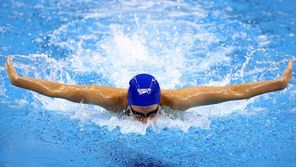 Jemma Lowe made her senior breakthrough in 2008 as she claimed individual medals at both the World and European Short Course Championships, topped the podium with the British 4x100m Medley Relay quartet at the European Championships and reached the 100m Butterfly final on her Olympic debut at Beijing 2008.
A relatively quiet year in 2009 was followed by a spectacular return to form in 2010 as Lowe won 100m Butterfly bronze for Wales at the Commonwealth Games and 200m Butterfly silver at the World Short Course Championships in Dubai.
Lowe continued her progress in 2011, reaching both the 100m and 200m Butterfly finals at the World Championship in Shanghai, then claiming silver in both events at the European Short Course Championships at the end of the year.
She finished sixth in the 200m Butterfly at the London 2012 Olympic Games then landed more international short course medals with 100m and 200m Butterfly bronze at the World Short Course Championships in Istanbul.
After scooping her first British titles since 2008 with 100m and 200m Fly gold at the 2013 British Gas Swimming Champs, Lowe travelled to her third World Championships in Barcelona where her best finish was ninth in the 100m Fly.
The following season, she made two finals in her third Commonwealth Games at Glasgow 2014, finishing fifth over 200m Butterfly and sixth in the 100m Butterfly.
In the Pool
Favourite Event
100m Butterfly
Finest Ever Performance
Making the 200m Butterfly final at the London 2012 Olympic Games.
Aspiration
To give 100 percent into being the best I can be. I'd love to compete at my third Olympics at Rio 2016.
Role Models
Parents.
Out of the Pool
If I Wasn't A Swimmer, I Would Be
A food taster!
Tip For The Top
Never give in. You come back stronger after a setback.
Life After Swimming
No idea!
Would Most Like To Meet
Channing Tatum
Most Prized Possession
Family
Biggest Influence On Career
Family.
Favourites
Sports
Swimming, tennis
Band/Music
I like most music but not heavy metal.
Food
ALL food except olives and prunes.
Hobbies
Cooking / baking.