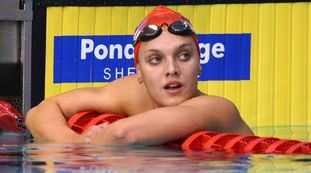 After winning 400m Freestyle bronze at the inaugural Youth Olympics in Singapore in 2010, Ellie Faulkner quickly blossomed into one of Great Britain’s top senior swimmers, winning her first British medal with 1500m Freestyle silver in 2011.
She impressed with World Cup medals and a European final appearance in the 2011 winter short course season, then was one of the surprise packages of the 2012 British Champs, winning bronze over 200m and 400m Freestyle and silver over 800m Free to book a spot at London 2012.
Faulkner sealed her first British title the following season, landing 200m Freestyle gold as well as a pair of silvers over 400m and 800m Free to qualify for her first World Championships in Barcelona where her best finish was 17th in the 400m Free.
After repeating her 2012 results at the 2014 British Championships, she made her Commonwealth debut for England at Glasgow 2014, finishing seventh in the 400m Freestyle and helping the 4x200m Freestyle Relay quartet to bronze.
In the Pool
Favourite Event
200m / 400m / 800m Freestyle
Finest Ever Performance
My 800m Freestyle at the British Olympic Trials, March 2012.
Aspiration
To make the team for Rio 2016 and give my best performance
Role Models
Becky Adlington
Out of the Pool
If I Wasn't A Swimmer, I Would Be
Lost, I wouldn't know what I would be doing, I've only ever been a swimmer. I would like to think I would have a job closer to finishing my university degree.
Tip For The Top
Winning isn't everything, but striving to win is
Life After Swimming
I would really like to work with young children and the sporting side probably helping them to swim.
Would Most Like To Meet
I really want to meet the Script. I love them!
Most Prized Possession
The Mulberry handbag my mum promised she would buy me when I made the London 2012 Olympic Games
Biggest Influence On Career
My family, friends, coaches and staff at training and of course the rest of the squad #TeamSteel
Favourites
Sports
I'm not really any good at any other sport other than swimming........
Band/Music
The Script, Taylor Swift and anything which I like that comes out into the charts
Food
​ A good steak and chips
Hobbies
Swimming, reading, shopping and watching TV.