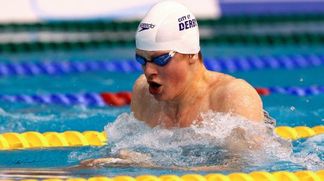 Adam Peaty
​Age 20 years old (28/12/1994)
Born Uttoxeter
Team/Club Cit y of Derby
Team/Club National Performance Centre, Bath
Coach Melanie Marshall​
Adam Peaty has made rapid progress since making his first European Junior Championship team in 2012, competing in all three breaststroke events in Antwerp and finishing fifth in the 200m Breast.
Peaty built on his international experience with a couple of final berths on the 2012 FINA World Cup circuit before breaking through with his first senior national medals at the 2013 British Gas Swimming Championships in Sheffield.
He won 50m Breaststroke silver and 100m Breaststroke bronze in Sheffield before ducking under a minute over 100m Breast for the first time to win gold at the British Gas ASA National Youth Championships.
Peaty brought the curtain down on his breakthrough 2013 season with a first senior Championship appearance, setting personal bests in all three breaststroke events at the European Short Course Championships in Herning.
He broke into the world's elite in 2014, winning 100m Breaststroke gold for England on his Commonwealth debut in Glasgow before winning four golds - including the 50m and 100m Breaststroke double - at the European Championships in Berlin, breaking the 50m Breaststroke world record in the process.
In the Pool
Favourite Event
100m Breaststroke.
Finest Ever Performance
50 / 100m Breaststroke at the Europeans 2014.
Aspiration
To be the best I can be every day.
Role Models
Chris Hoy, Muhammed Ali, Will Smith.
Out of the Pool
​If I Wasn't A Swimmer, I Would Be
In the Army or Navy as it has always been one of my motivations to represent my country in the best possible way; most notably in the Royal Marine Commandos.
Tip For The Top
Work hard but smart and take every opportunity to be the best you can be that day.
Life After Swimming
I have no idea!
Would Most Like To Meet
Will Smith would be pretty cool.
Most Prized Possession
My car.
Biggest Influence On Career
My coach.
FavouritesSports
Swimming, a little bit of football and rugby.
Band/Music
Hip-hop, house, dance, rap, anything really!
Food
Raisin flapjacks with custard.
Hobbies
Love chilling, watching cat videos on Youtube, cars, computers, games, listening to music.